This weekend Dave Imrie and I arranged a game for our AB1 group.  It was an AWI game – the Battle of Germanwine - based on a fictional action before the Battle of Brandywine.  The venue was the Old Manor hotel at Lundin Links in Fife.  There were 8 players at the game.  Jack Glanville, Michael Schneider, Angus Konstam and myself provided the troops and Dave Imrie provided his impressive terrain boards as the base of the terrain.
We played the game for 6 hours and at the end it was declared a Patriot victory as they had broken 9 British units.  Only the British left wing had managed to break into the main Patriot defence line.  The flank march on the British right by their Loyalist Brigade was held by the patriots whilst the flank march on the left wing by the cavalry and the elite 2nd British brigade proved a failure.   The cavalry when they arrived were driven off the table by Patriot infantry and the elite infantry only moved twice in 12 moves so only just got across the river at the start of their route.
The British found it a major issue crossing the river and this held up their advance for some time.  I think I made it too difficult to cross requiring a unit to get 2 moves in a turn.  This seemed to be beyond the dicing ability of the British commanders for a large part of the game.


In late August 1777, after a distressing 34-day journey from Sandy Hook on the coast of New Jersey, a Royal Navy fleet of more than 260 ships carrying some 17,000 British troops under the command of Sir William Howe landed at the head of the Elk River, on the northern end of the Chesapeake Bay approximately 40–50 miles (60–80 km) southwest of  the rebel capital of Philadelphia.


General George Washington had situated the American forces between Head of Elk and Philadelphia. His forces were able to reconnoitre the British landing from Iron Hill near Newark. Howe did not set up a typical camp but immediately prepared to march across the gently rolling country inhabited chiefly by Tories, with the expectation of making an easy conquest of Philadelphia. As a result, Washington was not able to accurately gauge the strength of the opposing forces.


After a skirmish at Cooch's Bridge south of Newark, the British troops moved north and Washington took up a defensive position along the Red Clay Creek near Germanwine.  This site was important as it covered the most direct route on the road from Baltimore to Philadelphia.  The British grouped south of the creek and General Howe decided to attack on the 11th of September.


Your objective is to bring the rebel army to battle and defeat it thus ending the war.  Threatening their capital Philadelphia forces the rebels finally to stand and fight.


You know that your troops are far better trained than the rebels but you know from experience at Boston that the rebels are formidable opponents when manning defensive positions.


The line of the Red Clay Creek is a good defensive obstacle though crossed by a bridge and is also fordable elsewhere.  Troops can cross the bridge normally and can also ford the creek by using 2 movement actions in a turn.  The creek can also be forded east and west of the map.  The high ground is on the rebel side of the creek.  You have observed that two redoubts have been constructed to cover the creek and the bridge.


You have 8 infantry brigades (4 British, 3 German and Loyalist) and a cavalry brigade available.    The main body of the army is deployed off-table south of the map.  4 brigades a turn can attempt to march onto the table.  Note that German infantry battalions can never get 3 moves in a turn.


You can attempt flank marches by crossing upriver and downriver from the rebels to fall on their flanks.  No more than 3 brigades in total can be assigned to the flank marches.


Decide which of your brigades will be committed to the main body and if required to the flank marches and their order of march and their deployment.
American briefing


Your objective is to prevent the British from crossing the creek and capturing your capital Philadelphia.  Compared with last year your army contains far more regular continental troops and is less dependent on militia.


The line of the Red Clay Creek is a good defensive obstacle though crossed by a bridge and is also fordable elsewhere.  Troops can cross the bridge normally and can also ford the creek by using 2 movement actions in a turn.   The creek can also be forded east and west of the map.


The high ground is on your side of the creek.  Two redoubts have been constructed to cover the creek and the bridge. The redoubts can each contain a gun and also accommodate a battalion.


You have 9 infantry brigades and a cavalry brigade available of which 6 or 7 can be deployed on the table north of the line shown on your map.   The other 3 or 4 brigades are deployed in reserve off-table to the north.  You must decide on the deployment of your brigades.  Only you can commit the reserves.


12 figure infantry units are small all others 16-20+ are standard sized units. 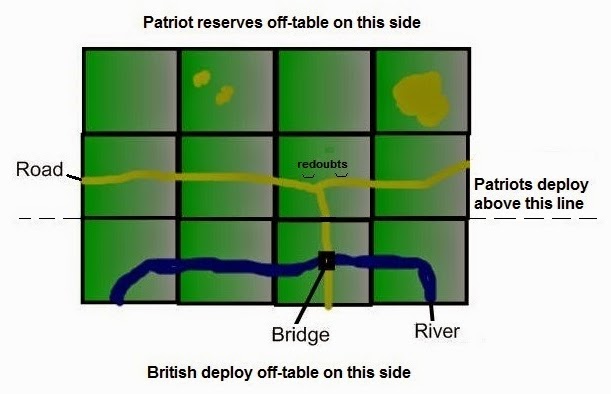 Having been inspired by last week’s Mtsensk game I put together another 20mm Operation Barbarossa Rapidfire game for my visit to Falkirk Wargames Club.  I supplied the troops, scenario and most of the scenery.  I setup a scenario so that I could use my T35 tanks.

How the game played
This is a tank heavy meeting engagement and both sides were limited in the numbers of units that could enter each turn.  Dave Paterson commanded the Soviets, Kevin Bowman the Germans whilst I umpired.


The Germans started the game sweeping onto the table with their 2 companies of Panzer IIIs which the Soviets countered with thei T26 and Bt7 battalions.  In turn 2 the Soviet T35 land dreadnoughts drove onto the table but one of them immediately broke down.  A single heavy damge hit caused the BT7 battalion to flee from the table.  The plucky T26s and the giant T35s fought on eventually destroying both companies of Panzer IIIs.  However the Germans finally got their antitank unit and lighter vehicles into action and they dealt with the T26s – one surviving tank fleeing the table.  The 2 mobile T35s were then destroyed by the Panzer IVs and that effectively ended the game.  I am going to restage this game at the SESWC in 2 weeks.

Historically the 34th Tank division had no T35s surviving on 27 June – just 5 days into the campaign.


*T35s are unreliable so after moving dice and on a 6 the model breaks down.  It can still fire but cannot move.

Update
As stated above I did restage this game this week at the SESWC with slightly changed forces as I had sold a T35 and once again it proved a German victory.  Bart has written a full account on his blog at
http://asienieboje.blogspot.co.uk/2015/02/dubno-brody-1941.html
Posted by Bill5549 at 3:16 PM 1 comment:

Dave Paterson and I had not decided on our game at Falkirk on Monday so I quickly adapted a game that I played previously.  I supplied the troops, scenario and the club provided the scenery.


The game was a variant on the 1941 Kamenewo scenario in the Rapidfire Eastern Front scenario book.  I simplified the terrain by omitting the river in the original map – moving it of table and revised the German OB to agree with the models I had available.  Dave Paterson commanded the Germans, Kevin Bowman the Soviets whilst I umpired.

The Germans made an impressive start to the game sweeping onto the table and quickly knocking out the rearguards T26 which was dug in near Woin.  The Germans panzers were making good going when on turn 6 the soviet BT7s and T 34 command appeared on the scene.  The shooting of these reinforcements was uniformly abysmal. Next turn the T34s and KV1 appeared and their shooting was not much better.  The game was all over in 2 more moves with the Soviet player conceding at the end of turn 9 by which time their only remaining tank on the field was the T60.  The Germans lost one tank destroyed.  This was a complete reversal of the result the last time I staged this game.  This game has inspired me to do another 1941 game next week

Here is the OBs and briefings for the players.


Objective
The German objective is to cross the table and advance to Woin.  The Soviet objective is to stop the German advance and drive them back to within 2ft of the fascist entry side. Urraah!

When I was at Claymore last year Jim Wallace from the Dumfries  Wargames  Club mentioned that they were experimenting with using a modified Hail Caesar break test chart in their Black powder games.   Since it was Jim who first alerted me to the Alternative Turn sequence which I now use in all my BP games this got me thinking and I started drafting my own version.  I first tested it in my Bennington  AWI game.  See
http://blenheimtoberlin.blogspot.co.uk/2014/11/28mm-awi-bennington-16th-august-1777.html


Following that game I made some more modifications and here below is the latest version of the chart.  The chart gives  less chance for unshaken infantry units breaking under fire.  However it does make skirmishers more vulnerable to shooting.   When to test and the break test modifiers are unchanged from BP.

Artillery are treated as infantry except  Artillery in Hand to Hand always Break instead.