At the SESWC this week I staged The Defence of Cuidad Espanola scenario from the Albion Triumphant campaign book.   The French had won the previous scenario and so gained an extra 3 battalions of veteran Polish grenadiers and 2 guns as the attacker for this game.

It proved a difficult task for the French as it is very difficult for them to cross the stream to get into action versus the town of Cuidad Espanola. So after 12 turns of play it proved to be a British victory.  My new Portuguese militia were blooded in this action even managing to win a round of close combat against the veteran Polish (GDW) grenadiers.  Sadly however they did break in the second round of combat.


Here are the OBs.

Bart has written a report on his blog at
http://asienieboje.blogspot.co.uk/2016/02/the-defence-of-cuidad-espanola-obrona.html

Michael has written a report on his blog at
http://meneken.blogspot.co.uk/2016/02/somewhere-in-middle-of-spain.html

Some photos from our Muskets and Tomahawks FIW game at Falkirk and District Wargames club last night. I was testing out a scenario for an upcoming M&T weekend this March.  It was adapted from a scenario posted on the Scotia Albion blog.  The British had to rescue their captain who was being held in a settlement by the French and their Huron allies.  It proved a blood bath but a British victory as they rescued their captured captain.


The forces were fairly balanced the British had 2 ranger units and 2 Mohawk ally units versus the French Canadian militia with 3 Huron ally units.

I continue to work slowly away on my Napoleonic collection.  Kevin Bowman painted for me 2 units of Portuguese militia from Eagle Miniatures.  I have based them and fitted them with standards from Warflags.  There are 2 more units in preparation to give me a full brigade.  With a change of flags they can easily masquerade as Spanish. 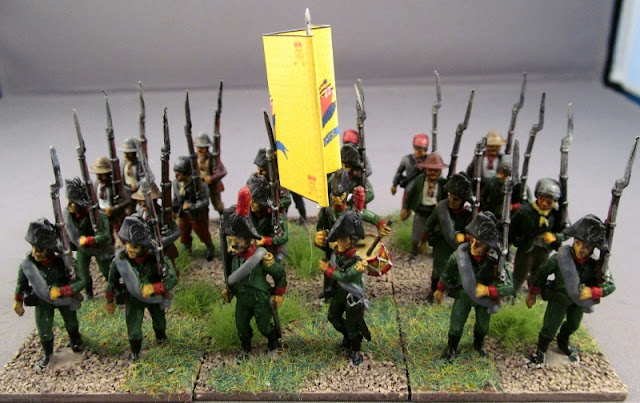 I have also added a brigade of Grand Duchy of Warsaw infantry as supports for my French army.  I bought the figures ready painted from South Africa and I added some more shading and rebased them.  They were my official Christmas present from my wife.  I really like the pose of the officer figures.Their flags I adapted from images available on the Internet.