We played this game at the SESWC 2 weeks ago.  It represents the attack of the 106th Panzer Brigade on the 90th US Infantry Division.  Historically this attack was as disastrous as the later attacks that month by Panzer Brigades on the 4th Armoured Division.  The game is based on a scenario which I got from Mark Piper’s 20th Century Wargaming site on the internet.  I slightly revised the OB to agree with my available models. I supplied all the troops for the game and Colin Jack and I provided most of the roads and buildings.

Scenario Outline
The Panzer Brigade advances onto the table and is met by the HQ elements of the 90th Division.  Three US infantry battalions with attached supporting units arrive in stages around the battlefield as the game progresses.  The game starts in darkness, which limits all movement and visibility, the arrival of dawn is randomized as is the last move of the game.  Unusually the Germans have an objective of withdrawing 2 of their attacking companies of their own base line.  This is because Hitler had limited this Panzer Brigades involvement in the attack to only 2 days.

How the game played
The German commander took the bulk of the German forces and attacked towards the Foret de Landers but was delayed by the limited movement in the dark.  Finally after a struggle he managed to clear the forest despite the effective off-table US artillery fire.  His advance beyond that point faltered as the US reserves filtered onto the table and even the M5 Stuarts proved effective shooting into the rear of the German armour.  The game lasted 14 turns and ended as a draw with the Germans achieving  2 of their 4 objectives – clearing the forest and withdrawing 2 companies of their baseline.  For once I forgot to take my explosions and smoke to the club and this combined with umpiring limited the number of photos that I took.  Bart Zynda who played the part of the overall German commander has written a more detailed account of the action on his blog at
http://asienieboje.blogspot.co.uk/2014/03/panzer-attack-at-mairy-pancerny-atak-na.html


‘Darkness’ to ‘Dawn’:
Roll 1D10 at the beginning of each turn.
Divide the die roll by 2 (round down).
If this is less than the turn number, ‘Dawn’ has arrived.
‘Day’ arrives automatically two turns after ‘Dawn’.

On Thursday I went to Hugh Wilson’s for our latest 28mm Bolt Action game.  This game is set along the Don River in early 1943 with the Germans and Italians defending against the Soviet Operation Little Saturn.  Campbell Hardie and Colin Jack provided most of the figures.  Campbell provided the scenario and Hugh Wilson built the excellent terrain.
The Soviet army supported by naval troops are attacking across the river.  Bart Zynda, Dave O’Brien and I commanded the Soviet troops and Hugh Wilson, Colin Jack and Tim Watson the Axis.  Amazingly the game on this first evening was comparatively bloodless.  My tank attack on the southern end of the table was seriously delayed by an artillery strike which disrupted most of my troops but at the end of the evening I had suffered no casualties.  Dave O’Brien’s armour attack on the northern bank was delayed by abandoned German transport blocking the river road only got into action late in the evening.  Bart commanding the Soviet naval troops launched them across the river and they suffered some casualties from the defenders.
Campbell has scratch built a wonderful looking Soviet river tank (armoured gunboat) and this provided the centre point of the game.  It was quickly immobilised by an Italian manned 88 on the far bank.  However the crew may well repair it as we are using the rules I developed for Vietnam river monitors for the river tank.  The Soviet highlight was an air attack which knocked out a PZIII.  That was the only AFV knocked out so far in the game.
At the end of the evening the game was still very far from decided and we have decided to continue it in 2 weeks time.  Once again thanks to Suzanne Wilson for the catering on the evening.  All my photos with descriptions at
http://www.flickr.com/photos/bill26048/sets/72157642738745305/
Posted by Bill5549 at 8:15 PM 6 comments:

As many of you may know, a friend of many and a long time member of SESWC, Iain Holt, very sadly and suddenly died last November.

A very close friend of Iain's, Jim Duncan, is dealing with sorting and selling Iain's wargame collection with the proceeds being donated to Iain's charity of choice, Combat Stress.

I volunteered to help Jim, and we've sold over £3000 worth so far (with more in the pipeline), though I've not passed this on to Jim yet (maybe I should go a long holiday).
I think it's time to say thanks to some of the people who've helped
A lot of the sales have been to the guys who come up here every second Thursday for our regular game, these include Angus Konstam, Colin Jack, Billy Gilchrist, Dave O'Brien, Bart Zynda, Campbell Hardie, Railway Tim and Ray Neal amongst others. I've also been helped by Ged in Leuchers.  I approached him at Christmas when they have their club's big game and he very kindly let me set up a 'shop' which did very well. Simon from Solway miniatures let me do a similar thing at the Albanich show. In addition to the above I'd like to thank my wife very much for putting up with a large part of  Iain's collection taking up our front room for nearly four months. A special thanks to Colin Jack for transporting me as I don't drive.  To Angus, Bill, Bart and Dave O'Brien for posting this on their blogs. To Mike Headden, Colin Smith and Charles Grant. To Iain's parents for a large contribution to the charity.  The biggest thanks are due to Jim Duncan for kicking it all off, sorting through Iain's collection and the selling he's done.
Lastly to all the others who have generously bought items...(I've also had a couple of donations from guys at Leuchars and Albanach who didn't actually buy anything, or who gave me more than I asked for).

Myself, Jim and a few others will be selling more at Falkirk and Claymore so you can see us there.  Hopefully by then we will all have raised quite a bit of money for Combat Stress.

I was away at the weekend at Kirriemuir in Angus for a 28mm French Revolutionary era island hopping series of games.  Over the 2 days 10 gamers attended from the LOGW.  All the scenarios were developed by Charles and Charlie Grant.
The 6 main players played the part of the British, French and Spanish colonial forces who were contesting for control of the islands.   There were 2 players for each of these powers.  On the first day there was a choice of 5 tables with differing scenarios.   Each of the 6 players played 3 games always playing a different opponent and on a different table.

On the Sunday we played a single big game – the invasion of the British colony of Calapso.  This was played on a 24ft by 6ft table.  The Spanish landed on the western beaches of the island and the French on the eastern beaches.  The 2 invasion forces first had to overcome the dangers of the surf and then cross the wilds of the island facing British and native ambushes and then assault the capital of Calapso to capture the 2 key buildings.   This game worked very well and ended with all 3 powers contesting over the key buildings at the end of the game.  It was adjudged by the umpires that the British were the winners as it was unlikely that they would lose both of them.

Over the weekend I played the part of the local distractions commanding various bands of natives, Barbary corsairs, prisoners of war and pirates who fought the forces of all 3 colonial powers.


It was an enjoyable weekend and the rules adapted from the Wargame worked well and were easily picked up by all the players.   My thanks to Charles and Charlie Grant who acted as the hard working umpires over the two days.  All my photos are on Flickr at

Email ThisBlogThis!Share to TwitterShare to FacebookShare to Pinterest
Labels: Colonial

This Saturday week I went to the Albanich the wargames show in Dumfries.  I was helping my club the SESWC with their Korean War 28mm display game.  Colin Jack organised the display which was a slightly amended version of the Bolt Action display which we put on at Partizan in Newark last year.  There was enough interest in the display to keep us from actually playing it until well into the afternoon.
Albanich is a small show but this year it had far more traders attending compared with previously.  My only buys at the show were the new Zulu supplement for Black Powder and some more bases from Martin at Warbases.

A long time friend and member of the SESWC, Iain Holt, very sadly and suddenly died last November.  Hugh Wilson and Jim Duncan have been disposing of Ian’s wargaming collection with the proceeds being donated to Iain's charity of choice, Combat Stress.

Simon from Solway Miniatures who organises Albanich gave Hugh a stand at the show and he managed to sell just over £900.  My thanks to everyone.  There is still a lot to dispose as it is a life times collection, so I am sure you will see Hugh at Carronade.

Unusually for this year the weather was good and we had a pleasant drive down.  More photos from the show.

This Tuesday I did something completely different and went with Dave Paterson on a tour of the battlefield of Bannockburn 1314.  Angus Konstam is working on a new book on the battle and asked us to take some photos for him.  Angus provided us with a detailed itinerary of the main locations.


It was a usual Scottish spring day – sun, wind, cloud, rain and hail!  Here are a few of the photos that Dave took which are not in the book. 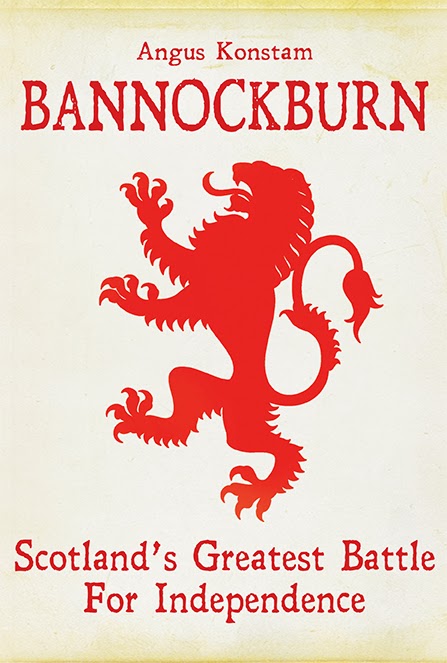