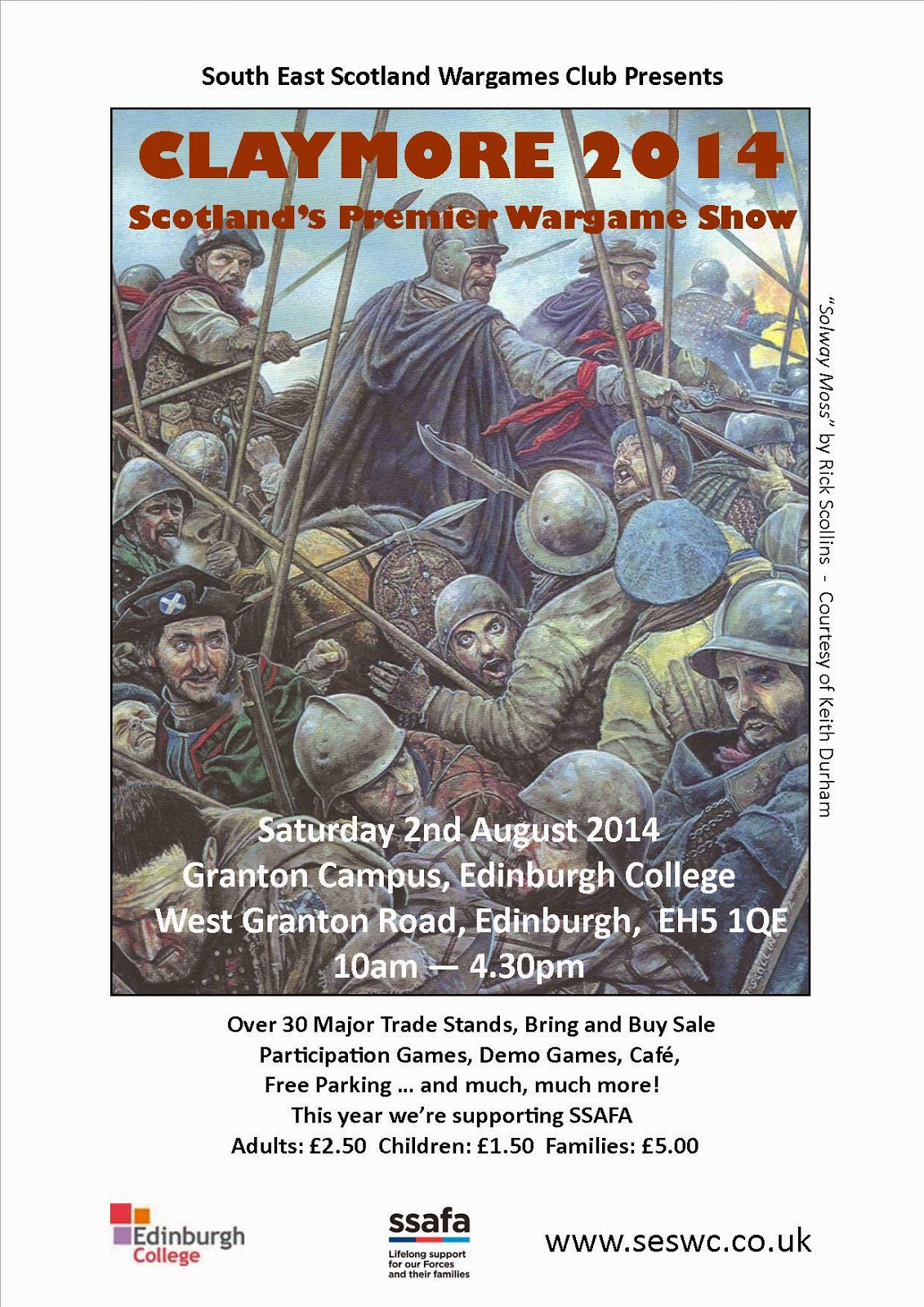 Features 30 Demonstration and Participation Games, 40 Tradestands and the classic B&B.

See the SESWC website for more details of the traders, displays and facilities.


Hope to see you some of you on the day.  I will be pottering about with my camera.  This is my last post for 2 weeks as we are away to Spain on vacation.
Posted by Bill5549 at 11:25 PM 4 comments:

I used the same OB as the first game but slightly amended the troop ratings.  I made the British skirmishers Crack and upgraded one line unit in Webster’s brigade to Stoic.  In addition I also told the Patriot players that if the North Carolina brigade became broken then the Virginia militia brigade would from then also count as Wavering.  Mark who was facing them did not know this.  Original OB and troop ratings are at
http://blenheimtoberlin.blogspot.co.uk/2014/07/28mm-awi-black-powder-camden-16th.html


The British plan was to break the Patriot left using the Regulars supported by the Reserve whilst my Loyalist command screened the Continentals on the Patriot Right.  The Patriot plan was to hold with their militia and attack with their good right wing.  The British advance on their right developed slowly due to poor command rolls and hesitancy on the part of Mark their commander who seemed overawed by the number of militia units he was facing.   This slow advance enabled Dave’s militia to redress their line thus enabling more of their units to face the British attack.  The Patriot right under Dougie made a steady advance against my screening loyalist units.
The British attack on the right was held by the militia who were outshooting the British – repeated disorders stopped the British from launching a coordinated   bayonet attack - the British brigade lost 2 units in the firefight.   Webster’s brigade was broken and had to withdraw to reorganise.  Mark threw in the reserve but the 71st Highlanders were also outshot and became shaken.  The Legion cavalry made a gallant charge breaking a North Carolina unit and their supporting Continentals but in their moment of triumph they turned and fled from the field.  The Highlanders also now had to retire to reorganise as they were part of a broken brigade and their commander Tarleton had been carried away severely wounded.
My Loyalists made a gallant stand against Gist’s Continental Brigade in the firefight both sides became Broken and had to retire to reorganise.  My problem was the Gist’s units rallied quicker than mine and under their artillery fire my Brigade again became Broken.
At that point we ended the game.  The British had only 6 units left whilst the Patriots still had 10 units and 2 guns.  All the British brigades were broken and their centre and right had fragmented.  We agreed it was a decisive Patriot victory.
Thanks to my wife Helena for providing the excellent lunch in the garden. All my photos with descriptions at

On Thursday I went to Hugh Wilson’s for our latest game.  This 28mm Back of Beyond game designed by Dave O’Brien was set along the Trans-Siberian Railway.   Colin Jack, Dave O’Brien and Hugh Wilson provided the figures.  Hugh Wilson built the excellent terrain.  We were using the Setting the East Ablaze rules.  We had 7 players at the game controlling Red, White, Czech, Mongolian, Chinese Nationalist, Chinese Bandit and Japanese factions.  I controlled the heroic Red faction.
My Red faction entered between Stations 1 and Station 2 and tried to intercept the 2 Czech armoured trains steaming east.  Unfortunately they were too fast for me and my few shots at them missed.  I then moved part of my force to engage the Whites advancing from the West on Station 1 while my cavalry advanced on Station 2 and set fire to the church in the town.  The Czechs had stopped their trains to engage the Chinese troops holding Station 3 who were supported by a river gunboat.  I moved my MG and Siberian riflemen to support the Chinese and engage the detraining Czech interventionists.   The Czechs had suffered some losses when the game ended for the evening.

At the end of the evening the game was still very far from decided – my Reds had not suffered a single casualty.  So it will probably last for at least another 2 evenings.   The next game will be in 2 weeks but I will miss that game as I will be on holiday.   We will be making some changes to the rules for our future games.
Once again thanks to Suzanne Wilson for the catering on the evening.  All my photos with descriptions at
https://www.flickr.com/photos/bill26048/sets/72157645570855343/
Posted by Bill5549 at 9:31 PM 9 comments:

Email ThisBlogThis!Share to TwitterShare to FacebookShare to Pinterest
Labels: Back of Beyond, Games at Hugh's


Last weekend I played out my latest AWI scenario here is the OB, briefing and troop types.  I plan to play the game again this coming weekend. .  Here is a link to all the photos with descriptions of the first game which was a marginal British victory -the  British lost 4 units and the Patriots 7 - importantly 3 of the 4 Patriot brigades were broken.
https://www.flickr.com/photos/bill26048/sets/72157645068967337/


Briefing - General Horatio Gates
Your Grand Army of the South was moving south by a night march to attack the British supply base at Camden. However in the early morning 7 miles north of Camden your scouts ran into the advance guard of the British army.  Both sides have now deployed for battle in the area of open ground on both sides of the main road bordered by the swamp.


Your Army is deployed in a single line of brigades with a brigade held back in reserve.  The right of your line is comprised of the 2nd Maryland continental brigade supplemented by the Delaware line, the centre is comprised of 2 brigades of North Carolina militia, the left comprises of the Virginia militia brigade and Armand’s Legion. The reserve comprises of the 1st Maryland continental brigade and some Virginia state cavalry.


The continentals are all proven troops but the militia has seen little or no action. During the night march numbers of troops fell out of the ranks and the militia units seem noticeably thinner than yesterday.


Briefing - General Lord Cornwallis
Spies reported that General Gates Grand Army of the South was moving south to attack your supply base at Camden. You decided to surprise them by a rapid night march. However in the early morning 7 miles north of Camden your scouts ran into the advance guard of the rebel army.  Both sides have now deployed for battle in the area of open ground on both sides of the main road bordered by the swamp.


Your Army is deployed with one brigade on either side of the main road with some troops held back in reserve. The right of your line is comprised of 3 units of British regular infantry with some skirmishers. The left of your line is comprised of the provincial loyalist regulars and volunteers. The reserve comprises of the 71st Regiment and the cavalry of the British Legion.


Your British regulars are all veteran troops but the loyalists are mixed in quality but many have seen action in the past.

Here are the troop ratings for the units.