This was a game based on the 2nd Battle of Polotsk  18 October, 1812 played using Black Powder Rules.

The Setup
The game was fought across a 14ft by 5ft table. This and the deployment allowed the game to be played easily by 6 players  The forces were not deployed historically at the start of game.  To get the game to fit into the space available we used the battlefield from our 1st Battle of Polotsk but with 2 redoubts added to the French deployment area.  The French army deployed with 4 infantry Brigades on the table with the heavy and light cavalry brigades and a  Bavarian Brigade in reserve of table. The Russians deployed with 5 infantry brigades and their Cossack cavalry brigade on the table with the two combined Dragoon/Hussar  brigades in reserve of table.

Troop Ratings and Rule Changes
To try to balance the game towards a historical result I gave the French infantry the Reliable in Attack Column useful rule and gave the Russian and Swiss infantry the Steady useful rule.  In addition I made the Russian infantry except for the Pavlov grenadiers poor shots with a -1 factor on their shooting.  The Pavlov grenadier battalion I gave 7 HtoH dice. The Russian militia/depot brigade had reduced HtoH dice, shooting dice and a Morale of 5+. All the units are BP standard sized units. The Russian commanders were all rated 7 and the French 8.
The game was played with the 66% version of the BP rules - reducing movement,  firing ranges and proximity distance by 66% but I retained the command radius and support at normal 12" given the size of the units.  Interpenetration was not allowed if one of the units was charging.  I allowed formed troops to move thru the woods but with their movement reduced to 50%.  We used the alternate turn sequence of Initiative moves, Shooting, Commanded moves, Melee - it works well for Napoleonics.

Background
While advancing on Moscow, Napoleon left a contingent of French and German troops at Polotsk to guard his northern flank against Wittgenstein. The French defensive bastion at Polotsk, alternately commanded by St. Cyr and Oudinot and located about 200 miles east of the Polish border and about 150 miles northwest of Smolensk, was extremely important to Napoleon for several reasons.
It was critical to French interests that Wittgenstein not be allowed to march south, because such an advance by the Russians would lead to Napoleon’s Grande Armee, hundreds of miles to the east, being exposed to an attack in its rear while it was engaging the main Russian army near Moscow.   Furthermore, the French position at Polotsk was important because it served to protect Vitebsk, which was one of three massive supply depots Napoleon had established in the western part of the Russian Empire.
Throughout the summer and early fall of 1812, Russians and French were stalemated at Polotsk, which meant that St. Cyr’s troops were accomplishing their objective of holding the “Dwina Line”. The first battle of Polotsk, an inconclusive engagement fought in August, had the effect of keeping Wittgenstein’s army at bay and won St Cyr his Marshals baton.
By mid-October, however, the strategic balance of power at Polotsk had shifted dramatically. Wittgenstein’s force had been reinforced by troops from Finland and St Petersburg and was now numerically superior to the French/Allied force it confronted.  The Franco-Bavarians had suffered attrition from the poor local conditions though the French had received somerecent replacements from march units.
On October 18th, Wittgenstein opened his offensive against the French “Dwina Line”.

French Briefing
Marshal Gouvion Saint-Cyr
Polish landowners have reported that Wittgenstein’s army is now superior to yours in numbers and is moving to the attack.  Expect a general action today.
The terrain is generally open with some high ground to the north flanking the St Petersburg road.  The villages and town of Polotsk are lightly built and only provide cover from shooting.  The exception is the heavily built convent of Spas which is treated as a built up area.  In addition you have constructed 2 redoubts covering the position and these are also treated as built up areas.
Your order of battle is attached.
At the beginning of the action at least one infantry brigade must be deployed in each quarter of the table.
The army reserve heavy battery must be attached to an infantry brigade.  The 2 cavalry brigades can be held of table in reserve and ordered on as required.  You must decide in advance which half of the table they are deployed behind.
The 19th Bavarian Brigade is deployed south of the River Dvina and may be brought on the table as the action develops if allowed by the umpire. 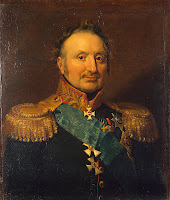 Russian Briefing
General Pyotr Khristianovich Wittgenstein
Your order of battle is attached.
Prisoners have told you that the Franco-allied forces have been suffering from supply problems and have been losing strength since the first action at Polotsk in August.
Your Cossacks report that the French have 3 or 4 infantry brigades defending their front at Polotsk with some cavalry support including Cuirassiers and Lancers.  In addition more Bavarian troops are camped on the south bank of the River Dvina.
The terrain is generally open with some high ground to the north flanking the St Petersburg road.  The villages are lightly built and only provide cover from shooting.  The one exception is the heavily built convent of Spas which is treated as a built up area.  In addition prisoners and patriots report that the French have constructed 2 redoubts covering the approaches to the town.
At the beginning of the action at least one infantry brigade must be deployed in each quarter of the table.  Other brigades may be held of table in reserve at the beginning but must be allocated in advance to the right or left halves of the table.
You can if you wish mass your Cossacks into a extra cavalry brigade with an additional horse gun.  If this happens the French light cavalry brigade gains a horse gun.  The 2 reserve foot guns can be attached to any of the infantry brigades.
The grenadier brigade contains a battalion of the Pavlov Grenadiers in their distinctive mitre caps.   The combined depot and militia brigade are poorly trained troops but all are now equipped with newly landed English muskets.
Your objective is to defeat the French and if possible capture Polotsk.