Partisan Warfare - some of the troops

I was on holiday near London last week and this week I will not get to the SESWC as I am attending a cultural event at the Edinburgh Festival. So instead of a game report I have put up some photos of the troops involved in the Operation Frankfurter partisan game. 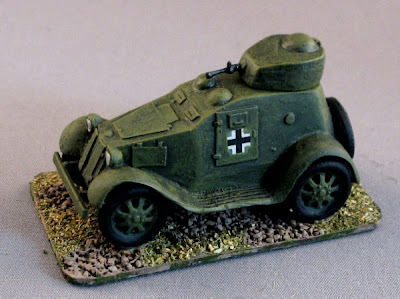 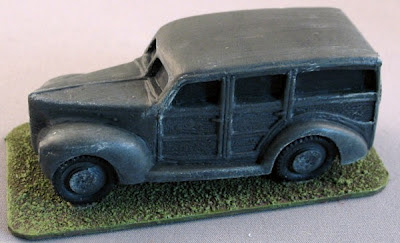 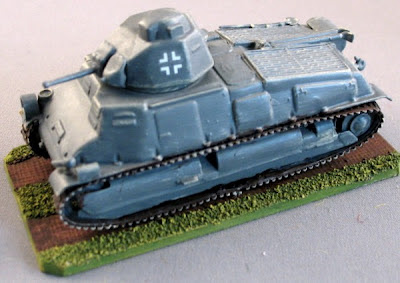 Somua S35 used by the special tank unit. I bought them built but unpainted for a projected but then abandoned French Army and painted them in German service. Plastic model by Heller? 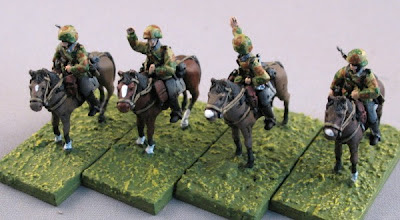 SS cavalry - who dismounted to retake the station. Painted by Jack Glanville of Pioneer Miniatures. SHQ models?
Posted by Bill5549 at 12:45 PM No comments:

This weeks big game was held Thursday.  It was a 20mm fictional anti-partisan game set in Byelorussia during 1942 played using the Rapid Fire rules.

Organising the game
The game was fought at Hugh Wilson’s house on a 12ft by 5ft table that Hugh had built for the game. I provided the scenario, some terrain pieces and the figures.   My thanks to Susanne for providing the refreshments.  There were 4 players and I umpired. Hugh Wilson and Colin Jack were the German players. Bart Zynda and Mr Ray Neal were the Soviet players.

Further down you will find the player briefings and OBs.

How the Game Played
The partisans deployed a brigade in each third of the table and then diced to see which piece of heavy equipment each of the brigades had.  The brigade at the east end of the table also received the 45mm AT gun and it was deployed to cover the road to the railway station held by the German railway guard company.   The Germans decided to deploy the Motorcycle battalion supported by the full Panzer kommando on the southern end of the road crossing the table. The Security battalion advanced from the north on the road to the railway station.  The Slovaks and Rona came onto the table on foot thru the woods at the southeast side of the table.  Finally their SS cavalry were placed in the first supply train to come down the railway line from the west.

The roads were treated as cross country terrain for movement - the only vehicles allowed in the woods were the partisan horse transport.  Partisans only deducted a D3 for movement thru the woods as they knew all the secret paths.

At the east end of the table the Slovaks advanced onto the table and at once met a partisan brigade HQ and a company who delivered ineffective opportunity fire.  The company was destroyed in 2 turns and the survivors of the HQ escaped towards their comrades attacking the station.

The partisan brigade in the centre attacked the station.  Their mortar in one of its few good shots demolished the building setting it alight and then 2 companies of partisans attacked from the forest, crossed the barbed wire and assaulted the building.  They defeated the railway guard unit who fled and occupied the station.
The Security battalion had its first truck destroyed by the AT gun and then suffered casualties from partisan Mg and rifle fire as they debussed.  They were saved by the arrival of a Stuka which attacked the partisan firing line.  They then moved on foot towards the station engaging the triumphant partisan garrison supported by the Stuka.  The supply train eventually reached the station and disgorged the hidden SS cavalrymen who on foot assaulted the station and recovered it from the Partisans.

The major German force, the MC battalion and panzers,  met some opposition as they entered the table but largely ignored it and pressed on up the road and then came under fire from Kolkhoz 14.  After a long struggle they took the farm and most of the column pressed onto towards the railway to drive to the station.  At that point the Cossack cavalry division arrived and recaptured the farm.  The Germans massed their armour against them but they  knocked out the German T34 with a well thrown petrol bomb.

With the recapture of the station and the partisans facing it in a weak state and their eastern most brigade dispersed by the continuing forest sweep of the Slovaks it was agreed to be a German victory.  We agreed that it was a good game that worked well - next time we need a few more special events.

PLAYER BRIEFING
BACKGROUND
The turning point in the development of the Soviet partisan movement came with the opening of the Vitsyebsk gate, a corridor connecting Soviet and German-occupied territories, in February 1942. The partisan units were included in overall Soviet strategical developments shortly after that, and centralized organizational and logistical support were organized, with the Gate's existence being a very important factor in assisting detachments on occupied territory.
In spring 1942, the concentration of smaller partisan units into brigades began, prompted by the experience of the first year of war.   The restructuring of the Partisan forces continued and by the summer of 1942, all the larger groups were well armed and supplied with ammunition. Their materiel included light mortars, light and heavy machine guns and some of the groups had antitank guns, a few had motor vehicles, and several operated reconnaissance cars.
The coordination, numerical build up, structural reworking and established supply lines all translated into greatly increased partisan capability.
Due to this on the 5th of June 1942 Army Group Centre launched a large-scale antipartisan operation, code-named 'Vogelsang', in the area of Bryansk, to clear the forests of Partisans and scattered Red Army units and to secure the rail lines and highways.   This game operation ‘Frankfurter’ represents a follow up action later in August that year.

DEPLOYMENT
Only the railway guard coy can begin the game on the table.  They can occupy a small defended station on the railway line.
One company of troops can be placed on a supply train.
All other troops enter the table from the table edges.  Motorised units can only enter along the roads or the railway line.  Units deployed on foot can enter form any table edge. The armoured unit can be deployed by coys.

SOVIET OBJECTIVES
Your objective is to interdict the fascist operation of the railway line.  Priority in particular should be given to the destruction of locomotives and rolling stock.  Fascist troops and their collaborators should be killed.   Your HQ and supply base should be preserved.
During the game supply trains will still be running to schedule along the main railway line.

DEPLOYMENT
At the start of the game you have 3 partisan brigades operational.  One partisan brigade must be deployed in each third of the table.  The supply base, a landing ground suitable for the landing of gliders and light aircraft,  and the partisan HQ must be deployed in different thirds of the table.   Each partisan company contains a rail demolition team.
All other troops enter the table from the table edges or land by air.
You may have the support of the 4th Cavalry Division which has been operating behind fascist lines since the great winter offensive and also a Stavka reserve Paratroop brigade.

This weeks game at the SESWC was a 28mm WWII game of an action in Holland in 1944.  Colin Jack supplied all the figures for this game.  I supplied the buildingsand the river.  Once again the  terrain mat we used for this game was a large sheet of faux (teddy bear) fur which gives the look of sunny wheat fields.


The composition of the forces, their armoured support, deployment and arrival times were generated randomly.  I was quite happy as the Germans ended up with a 2 squad  infantry platoon supported by a MG section, mortar section and a 75mm ATG.  In addition a Panzer IV was due to arrive on turn 3.

In the end the game turned into a fair disaster for the Germans.  We watched the allied advance - our hidden infantry holding fire except for indirect fire from the concealed mortar which proved completely ineffective.
Our Panzer IV arrived on turn 3 and immediately came under opportunity fire from the Cromwell supporting the Polish paras.  Bart rolled a 6 to cause a hit, a 6 to hit the suspension, and a 6 for effect which smashed the suspension and secondary explosions which caused the tank to brew up!

We then opened up with our infantry but at that point Colin revealed that 2 squads of Dutch resistance fighters were hiding in the block of buildings which housed our HQ section and MG.  Campbell commanded these troops and they immediately fired and charged into hand to hand contact.  After a vicious fight they were broken but they reduced the HQ and MG sections down to 1 figure each.

﻿
﻿ On our left flank the US infantry supported by a Priest drove back one of our squads and the US troops succeeded in getting a line across the canal and used this to swim across.  At the same time another US squad simply ran down the main road supported by the fire of the Polish paras and crossed the bridge unopposed whilst my troops were engaged with the resistance.

﻿
﻿ At this note the game ended being declared a major allied victory.  Once again Rules of Engagement seem to work well for this scale of action.
Posted by Bill5549 at 12:56 AM 3 comments:

Email ThisBlogThis!Share to TwitterShare to FacebookShare to Pinterest
Labels: Rules of Engagement, WWII

So Claymore 2012 has been and gone.  Good to see so many familiar faces.   We had over 30 displays and PP games and 35 trade stands.  The show went smoothly.  Attendance up slightly with 700 paying attendees thru the door.  Even the weather was unexpectedly good.

Many thanks to all who attended, presented displays, manned the trade stands and to the staff of Telford college for their help.

Nice venue - we are back again next year.  So I hope to see everyone again in 2013.  I can take it easy now until next February when the trade invites go out.

More of my photos now with updated descriptions at