This weeks game that I played at the SESWC was a play test of a set of rules that Simon from Solway Arts and Miniatures is developing for large scale Very British Civil War games (VBCW). Colin Jack provided the 28mm models and the scenario for the game.
﻿﻿﻿
Dave Cooper and I commanded a Vichy French Force attempting to recapture a pumping station in the Syrian desert from a unit of the Household cavalry. Colin commanded the gallant defenders and Hugh Wilson the motorised Anglo-Indian relief force.
﻿﻿﻿ The French force comprised the Foreign Legion, Senegalese and Moroccan colonial troops supported by 3 armoured vehicles. Dave’s main assault on the pumping station bogged down under heavy fire and my attempt to stop the relief force never got going as my supporting armoured car failed for 4 turns to move onto the table.  The game worked reasonably well but it showed up some areas that needed clarified in the rules﻿﻿﻿﻿﻿ ﻿﻿﻿﻿﻿﻿﻿The reason for the play test was that at the weekend Simon staged a large scale 2 day VBCW campaign at Carlisle. The scenario involved a landing by Prince Albert with his émigré supporters and a Canadian expeditionary force on the Cumberland coast. They were supported by a Scottish invasion across the border and flying columns of Tynesiders, Yorkists and Liverpool Free Staters.

The first day saw the raw garrison at Siloth routed by the massive invasion landing and the border defences driven in by the Scots. The other Royalist coastal garrisons managed to break thru the encircling Yorkists at Wigton and escape towards Carlisle.
The second day saw two major battles around the Royalist stronghold of Carlisle. To the north the Scots and the Tynesiders were decisively defeated and to the south west the Albertines, Yorkists and Liverpudlians were held to a costly draw.﻿﻿﻿﻿﻿﻿﻿﻿﻿﻿﻿﻿﻿﻿
﻿It was an enjoyable gaming and social weekend for the VBCWers taking part. Thanks to Simon for organising it so well.  We even managed to start setting up the Sunday game by 9:30am with the clocks having changed overnight.
﻿﻿﻿﻿﻿﻿﻿﻿
Posted by Bill5549 at 11:59 PM No comments:

I have 2 main projects at the moment - continuing to add units to my AWI collection and building up my Russian and French forces for the 200th Anniversary of the battle of Borodino in 2012.
﻿﻿ ﻿﻿

Here is the latest force to be added to my Russian Army. A Brigade of Don Cossacks commanded by Ataman Platov. The Cossack cavalry are Foundry Miniatures, the Don Cossack artillery crew are Steve Barber models and the Ataman Platov figure is a one piece casting by Front Rank.

The figures were painted by Reinforcements by Post. They were based by myself - the MDF bases are from Warbases and the Silflor tufts were supplied by Mutineer Miniatures. The standards and lance pennons are by GMB Designs who I see have their new website up and running.
Posted by Bill5549 at 11:17 PM No comments:

This week’s Thursday evening game was not played at the SESWC but was played in Hugh Wilson’s new Wargames room.

It was a 28mm Black Powder game based on the Mohawk Valley campaign of 1777. It was a hypothetical game - 2nd Battle of Oriskany - based on the British actually resisting the 2nd relief expedition under Benedict Arnold.

I devised the scenario and Dave O’Brien and I provided the figures from our AWI collections. Colin Jack and Hugh commanded the British Army whilst Dave, Kevan Gunn and I commanded the Patriots. I added 2 units of Hessians and a unit of British regulars to bolster the British force.

The British deployed with the Indians and Butler’s Rangers thrown forward, their 4 formed units holding the line of a stream whilst the Jaegers and Canadians screened Fort Stanwyx.

The patriots advanced with the Tryon Brigade on the track and the volunteer militia supported by the Continentals sweeping thru the woods. Butler’s Rangers broke almost immediately and fled leaving the Indians to engage the militia. In a long running battle the Indians were steadily driven back. A Hessian battalion which crossed the stream and charged the continentals in support of the Indians broke and ran before getting into hand to hand combat. Following this the last Indian units dispersed.
﻿﻿﻿ ﻿﻿
﻿The battle developed into a protracted fire fight between the British formed units and eventually the 6 remaining formed Patriot units. The 2nd Hessian battalion also fled at it’s first break test and with this the British commanders decided to call it a day and retire towards Oswego. Highlights of the game were the bravery of the wavering Tryon militia, the shooting of the Canadians who saved the Loyalists from a flank charge and the consistency of the Hessian’s who both broke! Must be that Hessian’s are simply not used to forest fighting.﻿ ﻿﻿﻿﻿﻿﻿﻿﻿
﻿﻿﻿

We used some adaptations of the rules to suit the terrain.  Skirmishers could move thru forest at full speed, formed troops moved thru the forest at half speed and the forest counted as clear terrain for shooting.  This last change meant that skirmishers still had an advantage in woods.  All troops in woods still recieved a +1 morale save to shooting.  we also enhanced the effectiveness of Indians allowing them to charge troops in flank and rear and any shaken troops frontally.

I think BP works well for AWI but we have not yet played a single game where the British have won!
The order of battle used is shown below.  The 20 figure units were standard BP units, any unit with 12 or 16 figures was treated as a small unit.

This weeks game that I played at the SESWC on Thursday evening was a cut down version of the Battle of Chillianwallah from the 2nd Sikh War in 1849.
It was a 25mm Black Powder game.  I devised the scenario and Colin Jack provided the armies from his Minifigs Sikh War collection.  Colin Jack and Neil McCormack commanded the British Army made up mostly of Bengali sepoys whilst  Dave Cooper and I commanded the Sikhs.   Both armies deployed facing each other with cavalry units on both flanks.   For an account and map of the actual battle link:
http://britishbattles.com/second-sikh-war/chillianwallah.htm
Normally when I have played BP before I have used the 66% scale version of the rules with reduced movement and ranges – this time we used the standard scale.  On a 6 foot wide table the standard scale worked okay but we did have some every sweeping advances with triple moves.  The game went fairly quickly even though Dave and Neil had not played the rules before.  For game balance I think all the Sikh Infantry brigades should be of 4 battalions but we lacked sufficient figures.   Even fighting with that problem for the Sikhs we declared the game a draw.
The order of battle I used for the game is given below.  I gave some units Useful rules.  The 4 British Infantry battalions were Steady, Crack and had First Fire.  Sikh cavalry were Unreliable and Wavering while the Alkalis were Bloodthirsty.  All the units were rated as standard size for BP.
2ND SIKH WAR Battle of Chillianwallah 1849 Scenario OB
Sikh Army  CinC Shere Singh  (7)
1ST and 2ND Sikh infantry Brigades each
3 units of Sikh Infantry of 16 figures
Gun & crew
3RD Sikh infantry Brigade
4 units of Sikh Infantry of 16 figures
Gun & crew
4TH Sikh Volunteer infantry Brigade
2 units of disaffected Sepoys of 16 figures
1 unit of Akali fanatics of 16 figures
Gun & crew
1st Sikh cavalry Brigade
1 unit of 6 regular lancers
1 unit of 10  irregular cavalry
2nd Sikh cavalry Brigade
2 units of 10  irregular cavalry
CinC  Lord Gough (8)
1st Brigade
2 units of British infantry of 14 figs
2 units of Sepoy infantry of 14 figs
Elephant drawn British foot gun
2nd and 3rd Brigades each
1 unit of British infantry of 14 figs
3 units of Sepoy infantry of 14 figs
Elephant drawn British foot gun
British Cavalry Brigade
1 unit of British Lancers of 9 figs
1 unit of British Dragoons of 9 figs
1 unit of Bengal Native cavalry of 9 figs
British Horse artillery foot gun
Posted by Bill5549 at 10:22 PM No comments:

Something different but in period.......

I was going to post some photos of  new Russian Napoleonic troops tonight but it was my birthday and my wife and daughter presented me with a surprise cake.  What a cake!

Here are a couple of photos.  It is in the period of the blog as the tank must be late WWII about 1944-45.  The experts will spot the date is correct as the commander is wearing shoulder boards!  As well as looking marvellous it also tastes great. 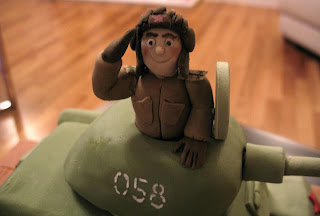 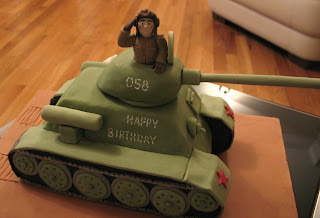 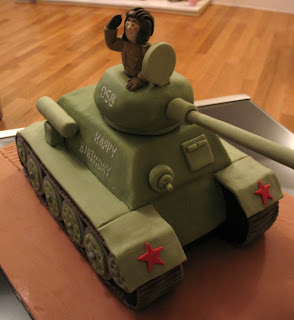 As I said I was away this weekend at the Lundin links hotel in Fife for a large scale 28mm ECW game.  It was played by 10 gamers from the SESWC over 2 days and involved 3 battles set around a hypothetical siege of the seaport of Hartlepool.  The rules used were a regimental variation of the Perfect Captain's Very Civile Actions rules.  It was great fun with masses of troops.
Dave Imrie's blog has many fine photos of the models used in this game.

The overall campaign map and one of my photos are shown below.

Email ThisBlogThis!Share to TwitterShare to FacebookShare to Pinterest
Labels: ECW

This weeks game that I played at the SESWC on Thursday evening was a 28mm Very British Civil War (VBCW) game arranged by Colin Jack.  This was actually our first chance to play the game that Colin and I displayed at the Albanich show in Dumfries in January.

John Glass and Dave Cooper commanded the Royalists and BUP respectively.  Hugh Wilson and I commanded the outgunned Socialists and Anglican league.   We used the Triumph and Tragedy rules which are simple and fun.  They work well until you have raw militia facing opponents armed with machine guns and artillery.  In this case both my raw socialist miners militia units broke on their first morale tests.  Highlight was the bus full of screaming BUP militia which was riddled by AT and rilfe fire just before it burst thru the gate of the Anglican airfield.    A full game report and photos will be on Angus Konstam's Edinburgh Wargames site.  http://www.edinburghwargames.com/Journal%2056.htm


This weekend I am away for a large scale ECW game being held at the Lundin Links hotel in Fife.  Yes it is out of period for this blog but there will be masses of lovely toys to enjoy.
Posted by Bill5549 at 10:27 PM No comments:

Email ThisBlogThis!Share to TwitterShare to FacebookShare to Pinterest
Labels: VBCW

Added a page describing recent refight of  the Battle of Guilford Courthouse 1781 including setup and order of battle.  Photos now added.
Posted by Bill5549 at 12:02 AM No comments: