I have been interested in the American War of Independence as a wargaming period for some time.  Originally I collected armies in 15mm and played using the LOOSE FILES AND AMERICAN SCRAMBLE by Andy Callan (originally published in Wargames Illustrated No. 1, Sept 1987).  These seem to the basis of the British Grenadier rules by Eclaireur.

I sold of my 15mm collection approximately 10 years ago and in the past 8 years have built up a 28mm collection.  They are a mixture of FrontRank, Foundry, Perry, Sash & Sabre and Old Glory figures.

For 28mm battle games I use the Black Powder rules.  Over the games I have played with Black Powder I  have steadily adapted the troop ratings from those given in the Freeman's Farm scenario (1st Saratoga) in the rule book.  Generally I have found that to give the British any chance in a game you have to reduce the abilities of the Patriot militia. I have reduced their hand to hand dice, morale value, made then Levy 4+ who have to roll of disorder, poor shots and for historically really poor militia, as at Camden, I have made them wavering.

﻿
For general reading on the period I recommend Digby Smith's An Illustrated Encyclopedia of Uniforms from 1775-1783  The American Revolutionary War.  As well as covering the uniforms it gives a good account of the military aspects of the war. 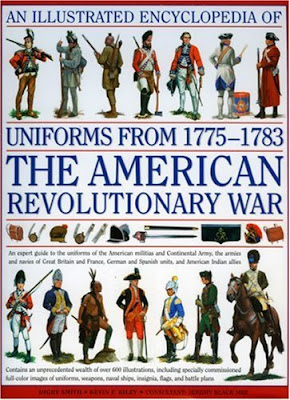 I also tried skirmish games with the Musket and Tomahawks rules which gave good results so we have done quite a few multi-player frontier skirmish actions in the AWI and FIW. I have also added some civilan characters to my collection for those.